Airplane colour and markings are one of hottest topics of modeler’s discussions. Especially when discussing Polish pre-war aircraft. Polish aircraft industry suffered badly in WW2 and almost no information is available. Only one P.11c fighter survived war and some documents. See what is known and what are results of recent research on painting of P.7a. In late 1980s atest survivor P.11c was overhauled in PZL factory in Warsaw. Original colour layer were carefully removed and then researched. First notes about pre-war airplane colors were published. According to a book „Polish Fighter Colours 1939-1947 vol 1.” colour painting order was as follows:

Also in mentioned book colour shades were discussed according to Nobiles colour chart. Nobiles was one of Polish Aviation lacquer paint supplier in 1930s. There were following colours used: 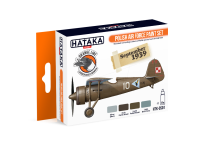 PZL P.7a were produced in early 1930s and painted with early khaki shade and lighter undersurface blue-grey. It also was on late series airplanes with PWU FK wz.33 Machine Guns (serial Nos from 6.109 to 6.150). Then during overhauling, when airframes were also upgraded from Vickers MGs to  PWU FK wz.33 MGs, they were repainted. It was done with available camouflage colour shade, like khaki late and darker blue-grey.

National insignia, white-red chequers were painted on upper wing surfaces asymmetrically. It was to make aiming harder for enemy. On wing undersurfaces checkers were painted without white fields for low visibility reasons. It was changed in 1938, when white squares were introduced to make chequer more visible to avoid friendly fire. During overhauling new high visibility undersurfaces insignia were painted.

Research of photos show that undersurface insignia were also placed asymmetrically in repeatable pattern. Explanation that it was done to make space for recognition codes is most probably wrong. Insignia arrangement makes to much space for single letter of regiment, and less space for two digit airplane number. Repeatable pattern of chequers placement is also visible on Romanian P.7a, where Polish insignia are overpainted with lighter shades and Romanian insignia are placed symmetrically. Hopefully somebody from our readers can explain it. There are exceptions, mostly on aircraft with repainted white-red insignias.

Each PZL P.7a Has to have painted name of aircraft type and PZL logo on both sides of vertical stabiliser, and serial No on left side of  fuselage. They were painted with red colour. In 2nd Regiment in Cracow they were initially white. Before war they were repainted black often. It happened in service that some of them would be missing or wrong colour.

PZL P.7a from 111 eskadra with all stencils and squadron insignia applied

Additional insignia like stripes or chevrons on wing or fuselage, exercises temporary insignia etc were painted. But they are subject of another story.

What in the box?

Model kit instruction explains (as well as it is known from sources) colours and markings of aircraft included in decal sweet. In next article on our blog you will find list of markings included in Deluxe set kit and some comments on each plane background.